If They Don’t See Your Value, Don’t Try To Convince Them – Interview to Frans Greidanus 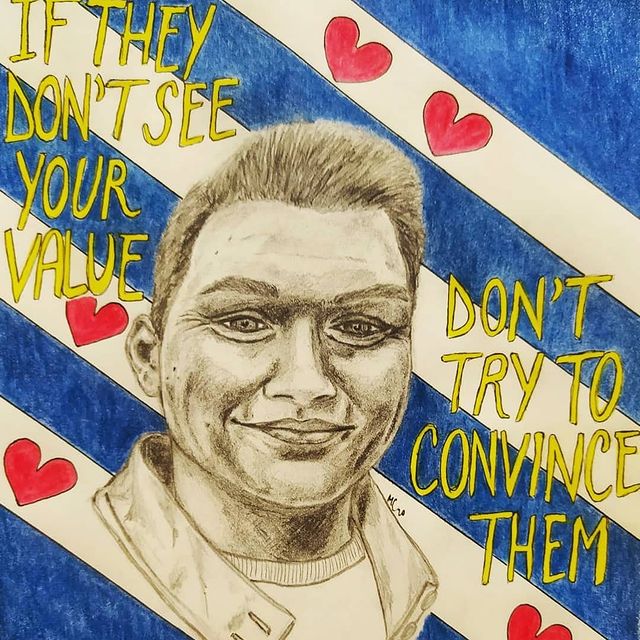 There are so many stories like the one Frans has told me in this interview. Too many. Episodes like this are commonplace. Boys and girls, younger and older, targeted. Pestered, reviled. And if violence cannot be accepted and tolerated in any way, in these circumstances it is even more unprovoked and sinful. Bullying is crude violence. It is an assault against who is considered “unsuitable” compared to the standards required by the sexist, patrairchal, racist and suprematist society we live in. Bullying is an imposition of degrading punishments against who thinks out of the box. Because, you know, diversity is scary.

I met Frans few months ago, during an Erasmus+ Project, in Spain. It was a nice winter afternoon when I arrived at the Airport of Madrid, looking for Frans, Tatiana and Vitaly. We planned to spend the day together, taking a quick tour of the city before reaching Rascafrìa, where we spent the rest of the week with other amazing people.

Frans was sitting at the cafè, smiling at me while his eyes tightened a little. The most beautiful smile I’ve ever seen. Suddenly I calm down, breathing softly. I felt at home. Frans is a young man, brilliant, cultured and witty. He has a lot of good and interesting stories to tell. But today I asked him to lend me some of his time to tackle the issue of bullying, with the finesse and humor that distinguish him.

Would you like to tell us your story? Are you feeling comfortable with that today?

I am comfortable to tell you my story. I think it’s a great opportunity to understand or realize things I didn’t do before, because writing my story on paper helps to recollect my thoughts and emotions I felt at that moment in time.

Talking about bullying is the only way to defuse this sick system which has a devious, “immobilizing” and plagiator power over the victims.

What effect did the words of bullies have on the perception you had of yourself? Did you share that with anyone? Your parents, your sister, some friends…?

I can still remember every hurtful phrase that has been said to me. These phrases, these words, has given me so much insecurities. Insecurities I have to face every single day, if not every hour. It affects my behaviour and the way I think about myself and common situations. For example, no matter how much I trust you or how comfortable I feel being around you, there are some things I don’t want to tell. Since I was a little child, I noticed my interests were different compared to the other children in my village. I remember that one moment a boy was picking up my sister. He saw what I was watching. Then, when I went outside to join their game, all the children were laughing at me. I cried and felt so ashamed. This situation repeated itself a couple times. Since then, I keep every tv-programme, toy or game I think is extraordinary a secret, even for my best friends. I fear the laughing and humiliation, even the little weird look they might give. I don’t like having this fear.

What also occurred, is being excluded. When I was around 11 years old, the children in my village made a little community. They didn’t ask me to play anymore. At this moment I began to feel lonely. It’s hard for an insecure child to have the feeling you are not wanted anymore. And you might think. this will be over as soon as they grow up and take different paths. No, this community still exists. My entire village is divided in different group of friends and I don’t belong in any since I was 11. Imagine being at a party and no one buys you drinks, discovering there was a party, and no one asked you to come, hearing as a child how much fun they had and knowing they only tell you just to make you feel jealous. This same situation happened in my third year of high school. I had a class with only 9 people and 5 of them were close friends. I was a friend of them, but I would not meet them in my spare time. I once had a hassle with one of the boys and everyone was against me. I was being excluded again. I was scared to go to school, I looked forward to the vacations and I once had to hide in the bushes, so I wouldn’t have to face the boys before the bell rang. And since I had no real friends in my village, there wasn’t someone to talk to (I could go to my parents, but that isn’t the same as discussing it with peers). I eventually asked my principal and mentor for help and they stopped it.

This influences my current behaviour. First, I want everyone to like me. I know it is impossible to be liked by everyone, but somehow, I still try. The reason I do this (aware and unaware) is that I don’t want to worry about being alone when my friends aren’t around. That I can always join a group without worrying they think it’s weird. I’m now studying for teacher and I have to learn to accept not everyone will like me. Second, I can’t handle it if friends, colleagues or classmates are meeting up without me. I jump into the conclusions they have enough of me and they don’t want to spend time with me anymore, which is stupid, because you don’t have to include me all the time. I don’t want to be jealous and think I’m not good enough.

The last topic I want to talk about is weight. From a early age, I was the heaviest boy in my school. I was fine, but the boys around me were just thinner. The problem started when they made comments or asked questions about my weight. They had this little twinkling in their eyes, because they knew it was a subject I’d rather avoid. It’s crazy how manipulative children can be. As I grew older it didn’t change. Everyone was skinny or muscular and then you had me. I admit I was chubby, but they made it look like it was something to be ashamed of. But this time it was different: parents were talking about me as well. My parents received comments about how chubby I was, and they eventually made me insecure too. I think this insecurity is the worst, because I got to deal with it every hour. Every time I eat, I ask myself if I should eat it. Every time I look in the mirror, I tell myself how fat I am. I don’t know any better.

My friends know this happened to me, but at the time I had nobody to talk to. I couldn’t talk about my insecurity about my weight to my parents, because they became the people who made me feel like this. What happened to me at high school, for example the hiding, is also something I didn’t tell anyone, because I didn’t really have one to talk about it and was kind of ashamed to say it to my family. And they couldn’t do much about it.

Bullying is not only a punch in the face or a despicable insult. It is whirlwind of wickedness, sucking anyone around. It gives rise to negative feelings. Shame, loneliness and guilt in the victim and a perverse fulfillment in the bully.

How do you feel about those guys? And what advices would you give to the Frans of few years ago?

I don’t feel any hate for those guys. If I see them, I greet und sometimes start a conversation. It’s more I think they don’t deserve me. Let me explain, because I don’t want you to think I’m thinking I’m better than them, which is absolutely not the case. It is more they don’t have the right to see my vulnerability. My insecurities, my struggles, my process: they have no right to get to know these. For example, I’m gay and I already knew when I was at high school. But I came out as soon as I’d go to college, because I don’t think they have the right to see me dealing with that process. I hope it make sense. I have forgiven them, because I know you can say and do stupid things when you are a chid (I did, everyone does), but I will never open up to them.

If I could give my younger self some advice, I would tell me those people are not worth my attention and I have to focus on the good things in life: friends, family, hobbies. And I would tell myself I have made it. I have great friends, a healthy and lovely family, a diploma I earned, a job I like, a study that’s going well and experiences I only could dream of. And I did that all by myself.

We were walking around with Tatiana when Frans told us that he was bullied. I could never forget his words, whispered is such an intimate and liberating moment. For him and for us, as well. A heart-to-heart that gave me the serenity and courage I needed to face my past, with the sufferings and the lessons I grasped from it. After all… what is happiness but seeing the light in the dark?

And what is happiness for you, Frans?

Happiness is for me having the strength to accept who you are and being able to see and accept who are good for you and who aren’t. I have the most amazing friends and my life is based on love and self-acceptance. Don’t be ashamed of who you are and don’t let anyone let you make it feel. Never.