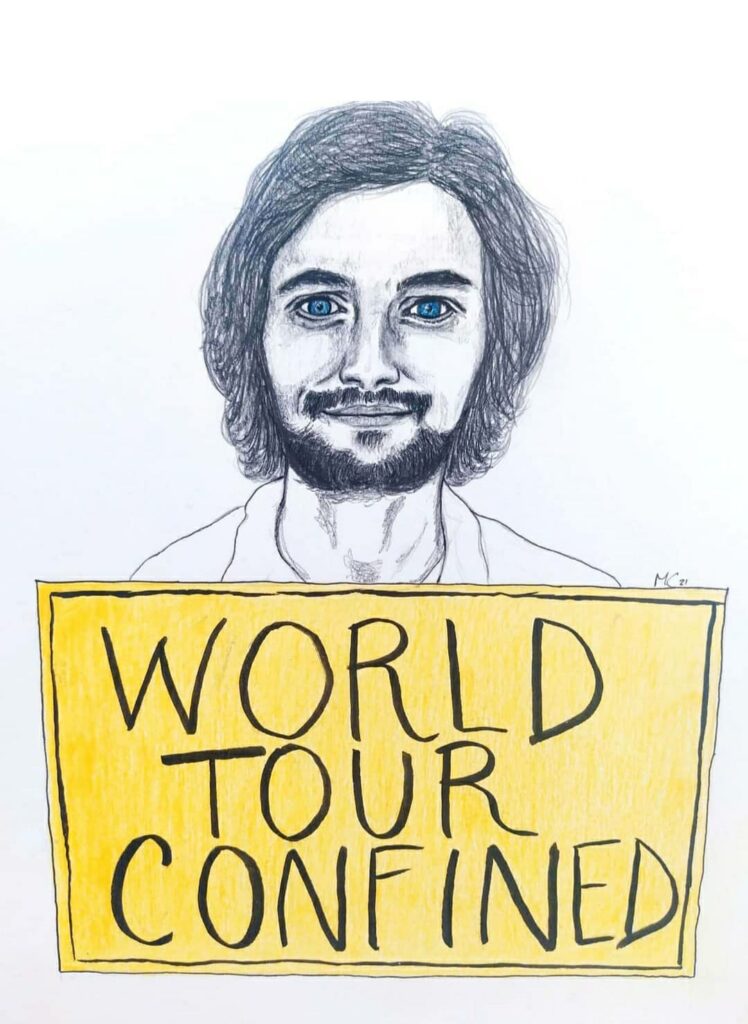 During these months, the term “social distancing” has become part of our daily language. We heard about it every day, referring to the measures adpoted in order to cointain the infection. And we have abused it, at times, using it more broadly, as if to exorcise the motivations that determined its tragic fame, thus also ignoring its even more dramatic social, economic and psychological consequences.

Social distancing, in iteself, means remoteness and this inevitably involves an abrupt and involontary interruption of human interactions. Actually, however, ways to safeguard and strengthen relationships between individuals, without implying physical proximity, do exist. And the project created by Edwin Bezier, World Tour Confined, is proof of that. Creative and passionate representation of a vast, multifaceted, complex humanity… but never distant.

What this tour around a temporarily “confined” world consists of? And how did the idea come about?

A confined world tour means being behind your computer and meeting people from all over the world through social networks to exchange, discover, and continue to open up to the world. The idea was born out of desire for discovery and through questioning that I initiated in a series of what I would call “constrained experiences” at the border between travel and artistic performance.

During my studies in social sciences, the diagnosis of the planet: the economy, ecological balances, social inequalities, etc…, questioned me a lot about the western way of life. The realization that the limits of this model had been reached came as a shock to me. I needed to set things straight, so I left with a backpack and lived under constraints: no money, no technology, no information, no network, no watch… I realized this, on the French west coast, in Rennes (my home town), Paris, Cannes festival, Mediterranean coast, in the UK. It made me question a lot about the basic needs of human beings, communication, trust, intentions, etc…

I’ve always dreamed of going around the world. With the announcement of the confinement in France, and the closing of all borders, I told myself that it was the perfect time to launch myself, to live new adventures under constraints. I think that the theme that stands out at the moment is the question of identity. I think it’s a project that I’m going to pursue until the end of my life, as a common thread.

Greece, Ukraine, Rwanda, Italy, Azerbaijan, Tunisia, Argentina… Your exhibition is a huge hug to people from all over the world.

How did you get in touch with them? Did you already know someone?

In most of my experiences, I try to do with the minimum, perhaps out of a desire to touch essential and simple things, putting the right conditions for intimacy and sincerity in the relationship. I start with the minimum.

At the moment, I join groups on the networks, countries, cities of the world on the internet and I get in touch with people I don’t know through this way. I would like to try to find other ways to get in touch, media, social networks other than American.

As a result of technological development and the use of social networks, especially overwhelmed in times of lockdown like the one we are living, the Net created the mirage of an “emotional proximity”, with the risk, increasingly concrete, to falsify the understanding we have of ourselves and of the others, and to transport it to a purely perceptive level. In other words, solidarity and empathy are getting more and more fluid, on order to give way to a “sense of community”, evanescent and individualistic.

As Turkle wrote in Reclaiming Conversation:

In this perspective, Edwin goes against the mainstream of the vast majority of social users, those who create a fragile and ephemeral community with consumerist voracity. A community in which there is no commitment to a real confrontation with the other members. World Tour Confined is not a “wall” of faces. It is stories, places, interests, memories… It is humanity, in all its shades.

What have you learned listening to so many narratives? Is there any story that struck you in particular and that you feel like sharing?

I am particularly interested in the notion of storytelling. Reading Nancy Huston, the Fabulous Species, made me aware of the place of stories in our lives. All the stories and exchanges I have are so rich. Several discussions on different subjects have marked me: on Gross Inner Happiness with an inhabitant of Bhutan, the place of women with an Indonesian woman, transhumanism with a Turkish scientist, the evolution of American society, Brexit, the Russian soul, the place of Africa in the world agenda, and then love, the family, and I forget some.

I was particularly sensitive to the testimony of a Kenyan on a Kilimanjaro climb. This climb, this dream requires so much effort, mental and physical strength, resilience in the face of hostility. It is inspiring to know that in spite of the most difficult conditions, everyone has unsuspected resources, a life drive that makes them capable of doing unthinkable things, hoping and fighting to catch dreams. It’s comforting to read this in this diffiducult moment that we are living through.

In some respects, Edwin’s project is very close to HUMANS: an anthropological and artistic journey around the world, with the aim of sharing stories and personal experiences, creating ties and feeling like we are all part of a real community.

In his famous essay, The Gift, Marcel Mauss defines the gift as the basis for the creation of social ties, which are co-present and sympathetic. To give is taking care of others. To receive is opening up to them. To reciprocate is laying the foundations for a full, empathetic and happy existence…

Edwin, what is happiness for you?

I think I haven’t found my definitive answer yet. At the present time, I would say that it is to be there, in a kind of state of equilibrium, in which the narrative of one’s past meets the future projections, giving the feeling of being the right place, in the right course of one’s life, not feeling constrained, without flying away and dispersing too much either.