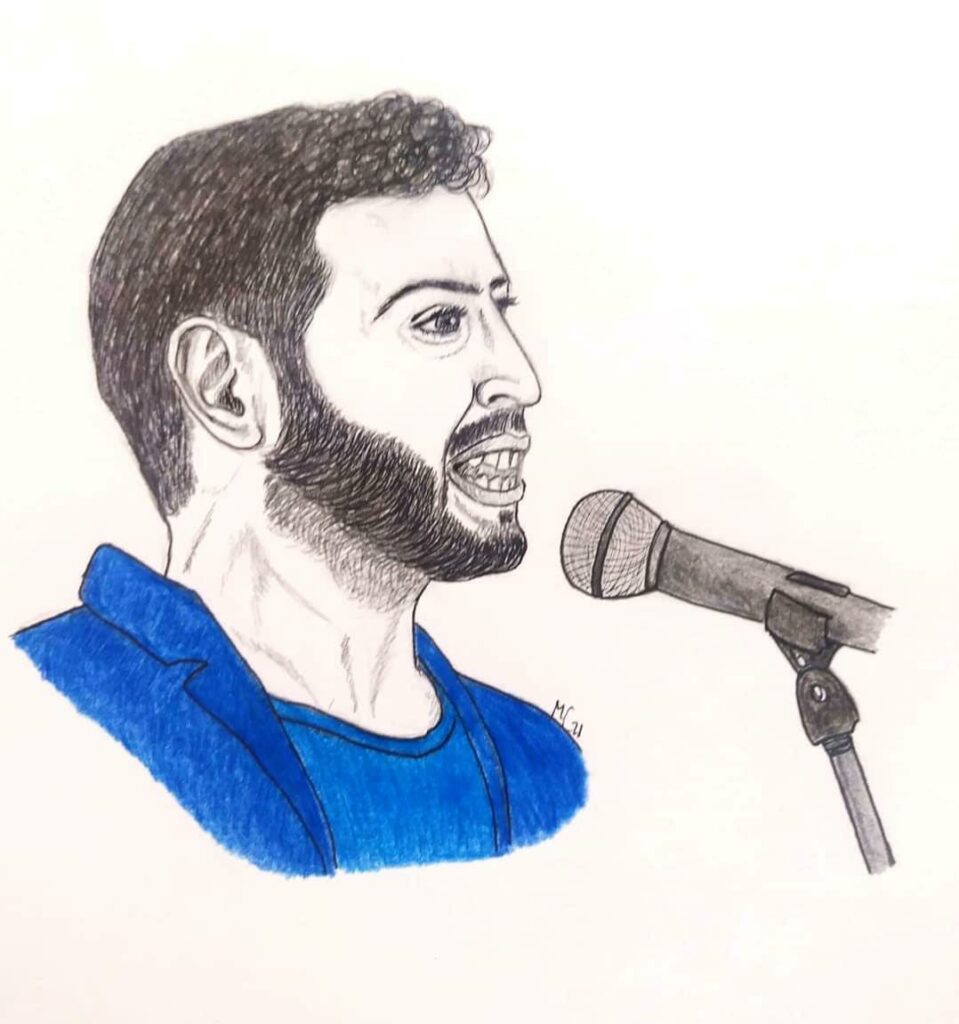 In October 2019, I began my internship adventure at the Centro Studi Sereno Regis in Turin.I remember that period with a bit of melancholy.A beautiful one, not nostalgic, in which I find myself often.It was all so different, I was different.That experience certainly contributed to my personal growth and gave me a lot.And among the most beautiful gifts, there is Ayoub.A human rights activist, Ayoub Moussaid is also a man of culture and for years now he he works as an enthusiastic youth trainer in the world of school, theater and museums.

When did you start working with young people? And what prompted you to take this exciting and complex path?

I started working with young people when I was a young man, too. Not that I’m not anymore, I just work with people who are sitting in school and after-school desks right now. As a socio-educational animator, I propose workshops on human rights education and theatre, in particular social theatre. I decided to start this path because I hope that no one has to live anymore the dofficult situations that I have met in the past, during the afterschool. Above all, I would like everyone to have the opportunity to express themselves and to be trained on the most important issue for every individual: human rights.

How do you get human rights into school? What educational methodology do you put into practice to accompany the youngest in their path of awareness and emancipation?

Starting from this definition, I said to myself: if they belong to all, then they are certainly already there, among the benches… a proper education, gender equality and the fight against discrimination are just waiting to be addressed and understood.To bring the students closer to these topics, I use the techniques of non-formal education, a methodology that mixes the multiple forms of learning through the experience of everyday activities related to work, family, leisure.The idea is to learn by doing, meaning learning not only as memorization, but also, and above all, as understanding through actions.

HUMANS was born during the very first months of lockdown but it was still an abstract idea, in which objective and target were very confused. I needed someone to help me making my mind clearer, and the first person I thought of was Ayoub. Our long and enriching conversation has given me endless stimuli, doubts and ideas, which today represent the fundamental elements of this project.

During that same telephone conversation, Ayoub told me that one of his greates dream, on which he had been working for a long time, was finally coming true… InMenteItaca, departure point of a uncertain journey and destination for the return to the much desired safe harbor.

What is Inmenteitaca and what steps did it have to take before obtaining legal recognition as an Association?

InMenteItaca is a social reality composed by an entire crew with the same purpose: to cross the much feared columns of Hercules, built over time by resistant mixtures of hatred, fears, selfishness and collective passivity.
We must go further, navigate, discover new, more equal and intersectional landscapes, leave a concrete and positive impact… as to prove that dreaming is not just idealistic.

InMenteItaca was officially born in August 2020, when we were finally able to see each other in person for the first assembly. But in the previous months, especially since the first lockdown, we had already started with the creation of the group, working on a long-term commitment: a real challenge that made us even more aware of the message we wanted to convey and of the actions we were trying to put into practice.

What is your mission and how do you pursue it?

Our association is born from a group of young people with different skills, but with the same mission: to promote training and education to human rights through formal and non-formal education projects, artistic activities, information and dissemination events with the aim of involving citizenship to address important and relevant issues, such as racism, discrimination, gender and social inequality.
After years during which these issues were considered as separate topics, InMenteItaca wants to emphasize their intersectional character in order to face these interdependent social dynamics.

Among his many interests, Ayoub is a lover of theatre and an expert in theatrical disciplines as a formative and stimulating tool to become aware of one’s own creative, expressive and communicative potential. Theatrical education is closely interlinked with nonviolence education, both active practices to guide those who decide to take part in a path of socialization, of valorization of one’s own abilities and those of others and of empathic listening to emotions, in a context of mutual confrontation and trust.

At what point in your life did you approach theatre and how did this discipline contribute to your personal and professional growth?

My first approach to the world of theatre was after a couple of years from my arrival in Italy, back in 2005. I had experienced many difficulties with the language, problems of discrimination at school and a big confusion after an adolescence lived between two countries and two cultures.Here comes the proposal to enroll in a theater workshop in Savigliano, together with the association “Voci Erranti”. I always thought, and I still believe strongly today, that thanks to the theater I have been able to find myself, or at least to understand who I want to be: the theater became my home, my family.

Which theater projects did you take care of and what was the educational-formative objective pursued?

I worked hard in the province of Cuneo in various afterschool.Through social theatre we were able to present on stage many works on different topics, such as racism, violence against women, bullying and poverty: themes that came from the ideas of boys and girls, and especially from their lives.In addition, in the last two years, in particular in some difficult districts of Turin, we have carried out theater workshops with boys and girls of foreign origin.The goal has always been to learn from each other having fun,but above all to find a space not only of dialogue but also of listening and vent in which we could all feel at the same level.

We had the common goal of taking care of ourselves and the group, and facing our fears and our shyness to allow ourselves to be listened by a world that judges and does not understand us.

As paradoxical as it is that the art of stage fiction represents one of the most authentic human activities, it is undeniable that the theatre is a concrete expression of the “here and now”, of the present moment.Every precise moment, every joke, every expression and movement, lives there, in that moment, and it is a gift that the actor makes to the audience.Theatre is the art of spontaneity, an essential attitude to find happiness even in small moments of everyday life.

Ayoub, what is happiness to you?

Happiness is love, pain and then love.
Happiness is a real smile,
but it’s also a sincere hug.
When you’re not lonely,
and you want to take off walking
proud.
Happiness is a home, a hot meal and
people next door.
For many it is peace and a quiet night,
for some it is to raise your eyes and find a star.
For me instead happiness is called
serenity.