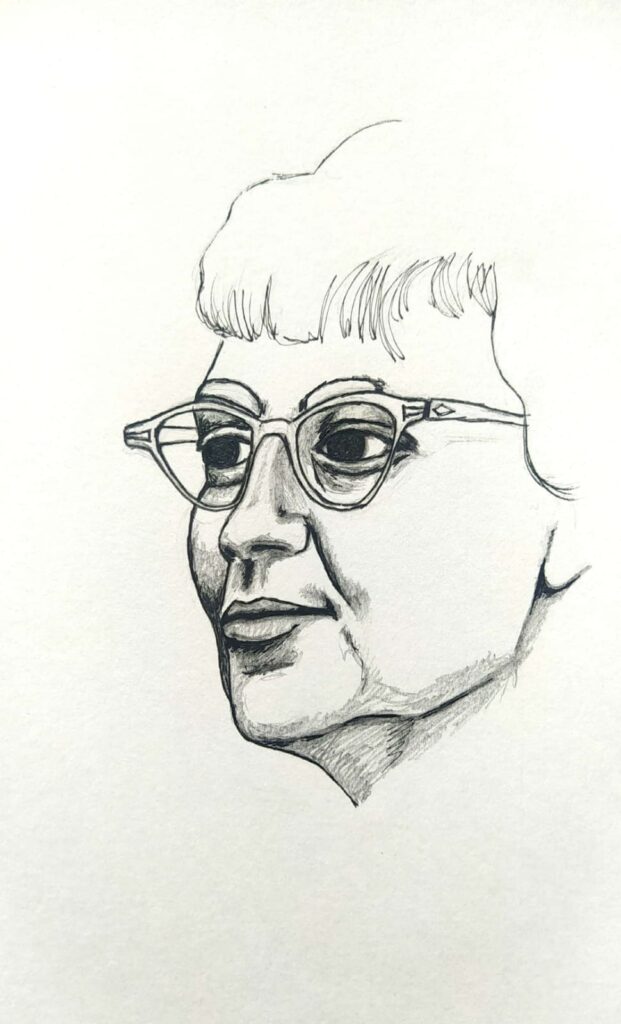 Dear, dear, dear, and so, here, for what I know, I borrowed this machine to be able to ensure, by writing, the material basis of existence for the children, for us, in short, for everyone, and now, here I am writing a love letter – there is something wrong somewhere – or, perhaps, on the contrary, everything is in perfect order, except that there is a shitty situation, in another sense, and so there is no choice.

Thus begins the timeless letter of Jana Černá, written in the 60s, but published only thirty years later in the collection of poems Clarissa and other texts.

Irreverent and passionate, just like her mother Milena Jesenská (the famous Milena of Kafka’s letters), Honza gets rid of the chains of dictatorship through writing and conducts every day her personal revolution. A private revolution, which becomes political.

Jana opposes chaos to the patriarchal order by inverting the narrative of the wife, mother and housewife woman. She got married four times, gets arrested for negligence in childcare, works as a tram ticket clerk to become independent, she lives nowhere.

She breaks every taboo. Her life is an adventure, wild and fascinating, exactly as her writing. She rejects reasonability in a world that craves it. A complete irrational world that spasmodically trudges in the search of meaning and an upcoming utility for everything, a world that overwhelms poetry and philosophy in a vortex of bulimic servility.

Instead, Honza protects the abstract and irrational nature of the world, which is expressed in the wonder of the senses and the excitement of them. Philosophy and poetry are not at the service of human happiness. They can hurt, upset, shake the soul. Like an “orgiastic excitement,” they are genuine and fleeting.

Jana Černá’s life, poetry and philosophy generate a virtuous cycle of nonviolent struggle against the patriarchal and male-dominated tradition. Against a toxic narrative that withstands political, social and cultural revolutions, and, generation after generation, spreads like wildfire.

Through verse and prose, Jana Černá dissolves the blurred boundaries between eroticism and existentialism. She restores purity and desire to sex and finds her passionate and philosophical strength in love.

Jana Černá would have hated such a short and simplistic cultural biography. She believes that words possess eternal value and summarizing hers would be reckless…

If you tell me again to write you only five or six lines, I will smash your face, without any sexual emotions, my love, I hope after this letter this is clear for you.

We heartily invite you to read the complete letter… make yourself comfortable and leave space for imagination.

Other books from the author:

The Balkan Route: What Civil Society Can Do - Interview To Adna Camdzic