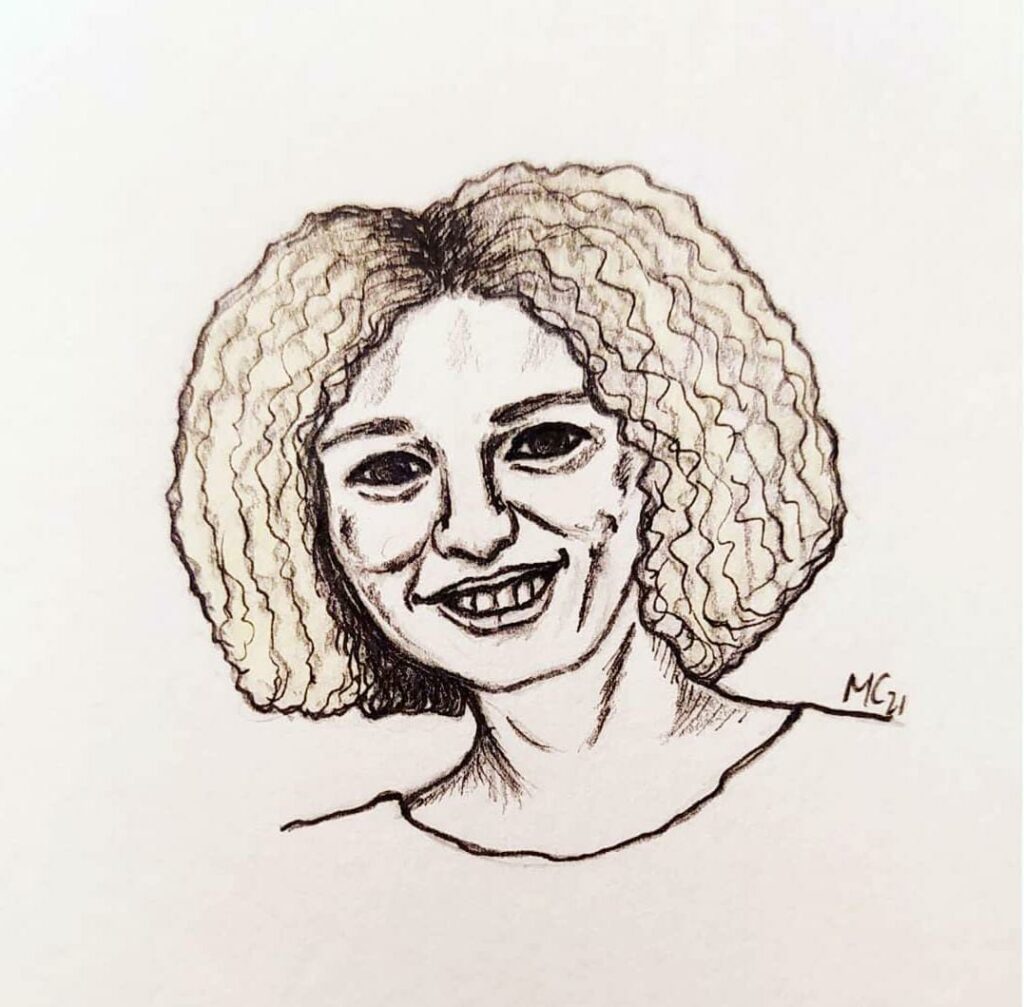 Niloufar Nojabaei, the owner of the restaurant Persian Food, is the new protagonist of the column “Multiethnic companies in Turin”. Her blond hair, almost curlier than mine, and the witty eyes, which let me imagine a beautiful smile under the mask, welcomed me in a cozy and charming place.

In front of a good cup of tea and some crumbly pastries prepared by her husband, Hassan Akberi, we engaged in a very friendly conversation, and Nelly told me some daily life episodes in Iran and the difficult but necessary choice to leave her country of origin to preserve an inestimable good of which no one should ever be deprived: freedom.

I was the director of a company in Iran, which produces colors for carpets and leather, which are also sent to Italy. I graduated in Persian Language and Literature, but I was hired by this company, which had nothing to do with my studies because the owner was a friend of my father’s… This is how it works in all parts of the world. In Iran, I didn’t need to work but I wanted because I hate the feeling of being useless in society.

My husband’s brother lived here and asked us to join him. Plus, we didn’t want our son to grow up in a country like Iran, ruled by fascism. I’m happy to be here and, until things change in my country, I’m not going back. It’s not possible to have a proper life there… we were born to be free.

In Italy, I have always worked, except for three years during which I dedicated myself to my child. Maybe I should have been more behind him...
The first job I did was distributing the newspaper “L’Eco”. Then, I worked in a restaurant for three years and a half. The director promised me permanent employment, but every time I asked him if he wanted my resume, he said he didn’t need it. In the end, he hired a girl without telling me anything. I felt stupid and betrayed. I no longer wanted to feel like that. I left right away. I was in front of the computer day and night, looking for a new job, and after a week they hired me at the Auchan. Who seeks shall find. If you need to do something, you have to go through with it.

When I worked at Auchan, the economic crisis began. And I could feel it every day… the shop was empty, more and more every day. In the end, I’ve been fired because they could no longer pay me. But I understood it and I took the opportunity to begin a new phase of my life. I went to Iran to sort out a few things and, in the meantime, my husband, who had to leave his job as a decorator due to a problem with his back, started looking for a place and shortly after, he found it. When I came back to Italy, I attended an Italian course at the University of Turin. And a professor of History of the East asked me to be a translator of Persian… I thought a lot about it but at the time we had recently opened the restaurant. I knew it was a high-level job, but I wanted to focus on my new business.

I had a loan from the bank but it was not enough… Compared to all the expenses that must be faced, that money is never enough.

In the beginning, the sales were not so satisfying. We were still unknown and the place was very small. A lot of Iranian students used to come and we usually gave them leftover food at night. Over the years, we had so many difficulties. We could not pay for everything… the taxes are too high. You work, you work, you work, and you end up with nothing. It’s impossible… you have to be a thief to go on without problems. With the health crisis we are experiencing, the loan we have received seems to be the only smart maneuver until now. For the rest, they’re making us die of anxiety…

What obstacles and new difficulties do you still encounter?

The economic situation in Italy is a bit difficult but I am very optimistic… When I see my husband preoccupied, I tell him to pray to God that he has given us owners who do not make problems on payments.

Our clients are predominantly Italians. of medium-high social level. They are very polite, never vulgar… In summer, when there are tourists, many Arabs come here because my son wrote on the restaurant website that we also cook halal meat.

I opened a restaurant to open my heart to those who come. I never get nervous because I don’t want the customers to feel negativity in this place… I try my best to smile and make them feel welcomed.

We have no employees. Before there was someone who cooperated on call… The last girl needed help paying rent, so we kept her a little longer until she had enough money.

We work on three main things: quality, behavior, and cleanliness. If you have those, you will also have customers. Our freezer is always empty because we don’t put anything there… We buy stuff according to the expected consumption, to reduce costs and increase earnings. It’s better to take small steps, but the right ones. If you have this policy, you’re a winner and you don’t risk bad notoriety…

In addition, we do not want to be dependent on anyone. We have no suppliers (except for beer). At a time like this, in general, with the poverty that exists in the world, nothing should be wasted. If there’s anything left, we pack them up and take them to those who sleep on the street. We don’t throw anything away, except for the things people left in the dishes (but usually nothing remains). We respect people. If you have conscience and respect, you won’t fear the competition.

When I worked in the company, I took an accounting course to pay all the workers… everything went through my hands, even the labels of chemicals. Then, since I started the restaurant here in Turin, I had to attend various courses and take many licenses: hygiene, administration, HCCP, distribution, etc… Some were very difficult, I remember I studied a lot, but when I passed them I was super happy.

The phase we are experiencing is global. If I was alone, I would have suffered more. I am trusting and satisfied.

In your opinion, is it correct to speak of “successful integration” in San Salvario? Do you see differences from other areas of Turin, other cities of Italy, or other countries?

When my husband came to Turin for the first time to look for a house, he set on a bench in Piazza Vittorio and said to his brother: “I will either live here or go back to Iran.” Finally, we found a house right there in Piazza Vittorio. In the beginning, we had difficulty with the language… We spoke English as a second language but here nobody understood us. So, I told myself that I had to learn Italian and I attended a course with my husband. When I arrived, I was young, resourceful, and brave… if you are not brave, it becomes more difficult. The first thing to do is to learn the language. Knowing one more language never hurts and it is necessary… it is a tool.

For the moment we have to face the difficulties caused by the pandemic, but before it started we wanted to expand the restaurant… I never lose hope. When they put us in the yellow zone for a few days, the place filled up. And that gives me so much joy because it means they haven’t forgotten us.

Travelling (By Bike) With Brina - Interview To Sabrina Steriti