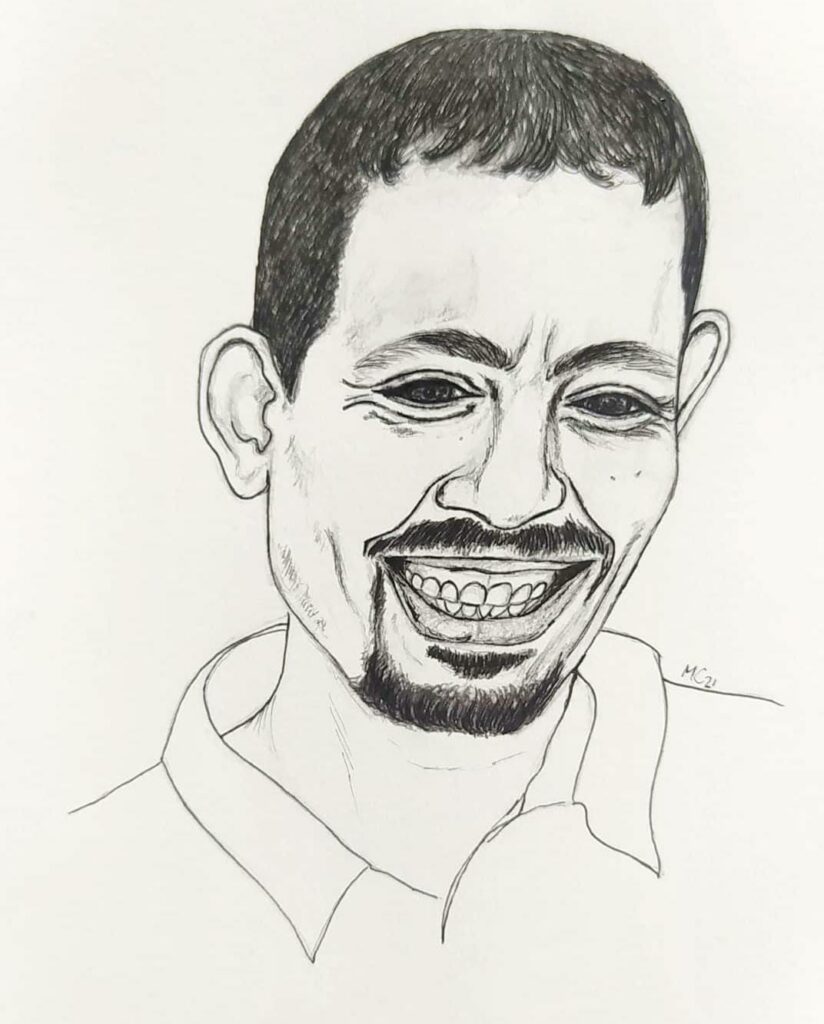 During my first weeks as a student in Turin, I wrote down in a small blue notebook all the restaurants, pastry shops, and bistros to try. Horas Kebab was among them. Yet for three years, I lived without the fantastic falafel of Bibo… I wonder how I did it.

Finally, that day came for me too. The day Bibo called me “Bella terrona!”. I couldn’t wait. Everyone spoke to me with amused enthusiasm about his peculiar way of interacting with the clients. And after the interview, I went back home with a smile and a pack of crunchy falafels.

I have a degree in mathematics and before coming to Italy I also worked in the catering industry. I attended college classes between 1985 and 1990, but I used to work because I didn’t want to ask my father for money. I did a bit of everything: electrician’s assistant, bricklayer, painter, worked in the countryside…

I have been to many Italian cities: Rome, Milan, Venice, Bologna, Bari, Verona, Vercelli… But, Turin’s like a small town, that’s why I like it. I chose Turin also because my brother was already here.

I arrived in Italy in 1990 and worked in the general market for almost six months, but there I did nothing more than work to survive. After that, I got hired in an Italian restaurant as a dishwasher, then as an assistant chef, and then chef. I also cooked for Juve for 5 years… See, I also have pictures of me with all the players and the coach!

After 4 years in the restaurant, the law of 1993 on the residence permit came out. However, the owner did not want to help me, so I had to do everything on my own, out of my pocket. His wife and he used to make fun of me and they did not give me any food. At noon, just dry pasta and, in the evening, a tiny bowl of green salad. That’s it. I never wanted to go back to that place again… Every once in a while, he comes by and I always try to be welcoming because I’m not like him.

After the experience in the Italian restaurant, I no longer wanted to work for others. I decided to open a place where you can find typical Egyptian and Arab dishes. We started in 2000 and the shop was very small, half of the current one. After a few years, we opened other places: two kebabs in Via Po and Corso Vittorio Emanuele, and a butchery in Via Berthollet. I also started a hairdressing activity.

Also, for approximately 18 years, I’ve been in partnership with a friend, dealing with the international transport of goods from Egypt to China, Turkey, Thailand, and Italy.

Did you receive any help/support from friends, relatives, public or private bodies…?

No one helped me. Many times I was treated very badly by Italian people. I remember in 1991 when I was still working at the general market, a man told me to leave because I didn’t understand the language. I was in Italy for two months and I didn’t understand anything. I had no idea how to go home and I couldn’t remember the address. There weren’t many Arabs at that time, maybe 10 Egyptians. I spent almost three hours on the bus until an Egyptian finally got on the bus and I asked him for help to find my way home.

Nothing goes right as rain. In the field of commerce, I have had many successes and many failures. In the beginning, I sold African drums from Egypt but I was screwed by many people, even here in Italy. But I’m a lively guy and I don’t get upset when there’s a problem. I don’t blame anyone. I immediately recover and tell myself: “I can do it!”

CHARACTERISTICS OF THE ENTERPRISE

Almost 90% of my clients are from European countries, not just Italy. I decided to attract this type of clientele mainly because I would like to work with them.

I have a friendly relationship with all my clients. After a few years from the opening of my restaurant, they opened other Kebabs in Turin, so I decided to take another way to remain in the hearts of my customers… You know, I studied marketing! My strategy is different from everyone else: I started calling my clients “immigrant”, “terrone”, “calabrese”, to make them laugh. And it also works as an ice-breaker between Italians and immigrants.

When someone gets offended – it happened twice in my entire career – I say, “Can’t you see I’m smiling?”… Not everyone understands the irony.

I have chosen employees from the Arabic region, not only Egyptians mainly because they understand the language and know our cuisine. It is easier to explain things and communicate.

Kebab restaurants have chosen the wrong strategy from the start because they have too low prices and that means you have to work much harder to earn something. We should do like the Italians: if it costs 3 to me, I will sell it for 6 euros. Instead, we worked a lot also because we overwork for the Italians. But, in the end, we chose to exploit ourselves. It’s a bad strategy.

I’m going to change strategy also because I want to expand the capacity and everything will be different: tables, new clothes for the guys, Piedmontese meat to make the barbecue… I started as the first Kebab of all Piedmont and now I want to be the best.

As for the competitors, I do not look at them. Everyone has their characteristics, personalities, and ways of working. It is never a competition because we are very different.

When there are new courses on catering, I always attend them. The last of 48H was a refresher course on the rights of the restaurateur and customers.

I am very happy and satisfied with what I have done. I am an immigrant and I managed to make my name known all over Piedmont. I’ve also been a sponsor of the Toro team for 15 years… When you go to the stadium, there is my name and my face. That means I’m good.

In your opinion, is it correct to speak of “successful integration” in San Salvario? Do you see any differences from other districts of Turin, other cities of Italy, and other countries?

I love Turin, it’s my home. When I arrived, San Salvario was not a safe area. After 8 p.m., you could no longer go out because it was ruled by gangs. A few years ago, the tension slowed down a bit and the relations between Italians and immigrants seemed to be improving. Then, immigration “has become too much”… The classic excuse of the Italians to justify their unemployment. It’s a scam: they will always find excuses and will never work if they think of finding a job related to their studies immediately after university. I also graduated in mathematics but I do not teach. I was a bricklayer, dishwasher… Are graduated Italians who don’t work because they are waiting for the dream job better than me? I don’t think so.

Drug dealing in San Salvario is real but it is not difficult to arrest the people involved. The police, however, don’t do that. It’s a political thing to make interactions between Italians and immigrants more hostile. It is a big scam because it is not true that the problem of Italy is immigration. Indeed, migrants could be an asset to the country.