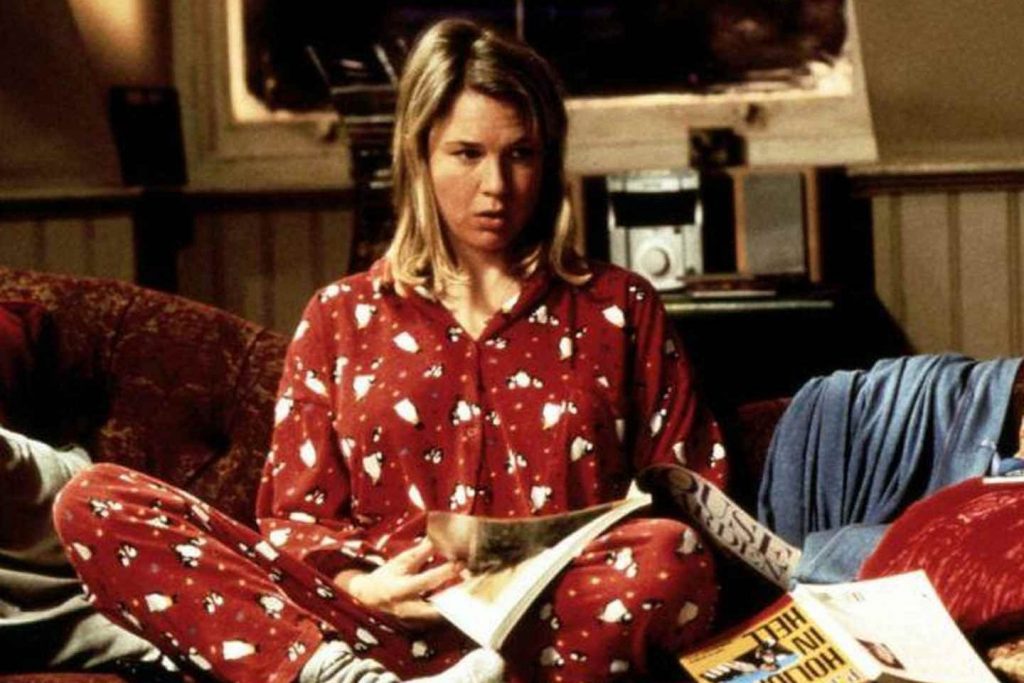 A few months ago, I turned twenty-five. Disbelieving in front of the realization that I was no longer twenty-one, I felt the urgent need to rebel, but the celebrations of the night before had made me very sleepy and the idea of ingesting more alcohol did not appeal to me at all. Watching a movie that wistfully reminded me of my teenage years with my best friend seemed like the perfect solution. Blanket, chocolate chips cookies, and the favorite winter comedy of teens of the 10s, Bridget Jones’ Diary.

The euphoria was soon replaced by a bitter realization: in an hour and a half, thirteen years of negative thoughts about my body, the fear of not being beautiful and intelligent enough, the dysfunctional dynamic that made me feel attraction to a certain type of human being… The yearning pursuit of the 21st century Western beauty standard that is a constant throughout the movie.

How can one sentence contain so much violence? Consumerist need for change, fatphobia and fear of loneliness.

As Chiara Meloni and Mara Mibelli write in their book Belle di faccia:

“The wish/shopping list that each of us has found ourselves compiling while severely observing our own reflection in the mirror could be endless. They’re called beauty standards and they didn’t come down from heaven as commandments, they’re a product of patriarchy and capitalism steeped in sexism, racism, classism and ableism. They are unrealistic, they are unattainable, and yet for years we’ve been agonizing over them. […] Women’s bodies have always been political space, the way we are required to perform our gender is a tool of oppression. The more we are committed to despising our bodies, working on our appearance, and spending our time being socially acceptable, the more controllable and better consumers we are.”

And on Bridget Jones’s wish list, weight loss is what the protagonist puts the most effort and confidence into: losing weight will make her a better person, in every way, and, as a natural consequence, she will find the love of her life.

This hammering coexistence between sex/love and weight is constantly proposed, as if the absence of one was the direct cause of the presence of the other. We are constantly driven to seek self-sufficiency, but at the same time imprisoned in a condition of eternal dissatisfaction, of inevitable loneliness. Sartre said that loneliness is an essential part of the human condition. And as long as a cloud impregnated with shame hovers over loneliness, then why wouldn’t we want to dilute the pain by being with someone? Specifically, with a man.

Bridget Jones waits for “the one” and, in the meantime, undergoes terrifying beauty routines. She wears containment panties to flatten a belly that is already flat, constantly monitors her weight… After all, the idea that we must be well-groomed and thin, otherwise no one will ever catch us, and that to beautify we must suffer, is strongly rooted in Western society.

And speaking of language… Bridget Jones’s Diary is not without a heavy dose of fat talk, another symptom of fatphobia and a powerful tool of fat shaming.

Most likely, we also have uttered such phrases, alone or in the company of other people, feeding a vicious circle of contempt for ourselves and for fat bodies, from which it is impossible to escape unscathed. To quote Chiara Meloni and Mara Mibelli again:

“Several studies have shown that fat talk can lead to the development of a negative relationship towards one’s body even in those who did not previously have it.”

And if this is true for interactions between people in the same circle, the damage can be even greater when it is Bridget Jones who speaks with so much disgust about her body, in front of millions of young viewers and spectators.

Of course, sexual harassment, disguised as goliardic complicity, could not be missing.

A hand on the ass, just like that. And you? Although the expression in her eyes appears surprised, she doesn’t say a word and remains motionless.

As Marina Pierri explains in her speech published in the book Anche questo è femminismo:

“What we decide to represent with a given story is a condensation of reality loaded with meaning. And stories, after all, do what they have to do: they entertain, but they cannot help but convey, in a soft way, the hard power in which their productive structures are immersed. Gender binarism, white supremacism, male supremacism, capitalist supremacism are the subterranean driving forces behind much of what we recognize as mainstream representation. What, then, of all that is not functional to the display of patriarchal order and control? Showing also (and necessarily) implies hiding. In this silence and in this darkness, in the Hollywood century that has just passed, the skeletons of what the established order pretended was not there remained. This is the social illusion of representation: that what is represented constitutes the only and possible interest and rightness in the world.”

Once we become aware that films like Bridget Jones’s Diary do not represent a true reality for all people, we are confronted with the impossibility of eliminating the “parastructures of power” overnight. What can we do, then?

We can start by reading the data of audiovisual representation, because it speaks volumes and is a tool of resistance against those who cry “dictatorship of political correctness.” And we can change the way we talk about certain topics, because change starts with words and we can choose to use the most representative and inclusive ones, at least in our personal sphere.

Il Pulmino Verde: beyond the borders